How Good Was Kronsteen?

In From Russia With Love, we're presented with Kronsteen as S.P.E.C.T.R.E. #5, head of Planning, a chess genius and arrogant mastermind of evil. Well, based on what we see, how true is that? 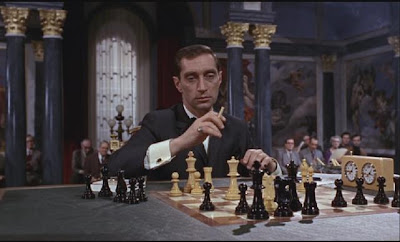 Let's start with the chess. Surprisingly enough, they pretty much get that right. Our first image, tells us a lot: 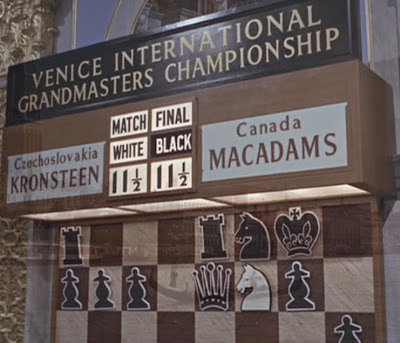 Two things of note here. First, this is being billed as an "International Grandmasters Championship." In the novel, Fleming merely had Kronsteen the 3-time Moscow champion...he explicitly hadn't reached grandmaster status. I guess the producers wanted to pump up his rep, to make him a worthy opponent for Bond.

Secondly, note that this is the final match, and that the score is 11 1/2-11 1/2. In chess matches, you get 1 point for a win, and 1/2 point for a draw. In other words, at this point Kronsteen and his opponent, the Canadian MacAdams, are in a dead heat. If Kronsteen is so much better than everyone, he sure hasn't proven it against the Canadian. Unless, of course, he's just toying with him.

Next, let's look at the final game itself. Here's our the position the movie brings us in at. Kronsteen is white, and it's his move: 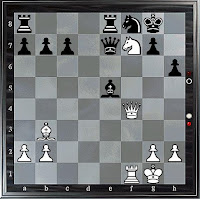 I whipped out my Chessmaster 9000 program (which is where I got these board position pictures from), and analyzed the moves that we see. Kronsteen's first move: Knight x Bishop E5 check: 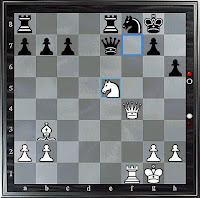 Now, given this position, this was a no-brainer, according to Chessmaster. No matter what level of skill I set the program to, from Bobby Fischer to a rookie 8-year-old girl, this was the move it made. It wouldn't even consider another line. So while the move is a very solid one, it hardly proves his brilliance.

MacAdams has only 5 possible responses, and he chooses the worst...King H7: 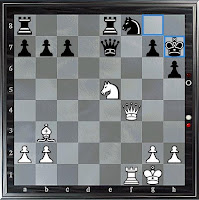 This was a terrible blunder, according to Chessmaster. It really was the worst possible move he could make. Before, while he had a big positional disadvantage, he wasn't behind much materially, and could have forged a draw (or even won the game eventually, if he were playing the 8-year-old). But now he's locked himself in, and Kronsteen moves for the kill: Queen E4 check. 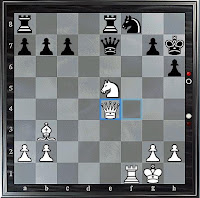 The audience jumps up and murmurs, as if was some unexpectedly exceptional move, and MacAdams congratulates Kronsteen for "a brilliant coup." Chessmaster just yawns, however. Again, the move was so superior to other possibilities, I couldn't get Chessmaster to make another, no matter how poor I made his skills.

MacAdams is correct to resign here, as his only option result in Mate in 4, Mate in 9, or a long drawn out bleeding that will inevitably result in Mate unless Kronsteen falls asleep.

Well, we didn't learn much, did we? Kronstein, for the whole match, was dead even with MacAdams. And the moves we see him make are the exact ones pretty much any player would make. Any brilliance has to come from how Kronsteen put MacAdams in that position to begin with, which sadly the movie doesn't show us. So it's hard to judge exactly how good Kronsteen actually is, particularly since this victory was due in part to his opponent's blunder.

Of course, we do see all the moves of his game against Bond. Kronsteen's plan to get the Lektor would have worked, had Red Grant not gotten greedy for a few more gold sovereigns (what, S.P.E.C.T.R.E. doesn't pay enough?) and have some class warfare arguments with Bond. And Tania actually falling in love with Bond, while not having much impact on the outcome, wasn't projected either.

He did correctly read the British mindset that they couldn't resist a trap; he did foresee that setting England vs. Russia would cover Grant's activities; and his man did end up with the Lektor, and Bond should have died. He, as he boasted, foresaw "every variation of counter-move"...except where emotions came into the mix. It was the human element that failed...which is why chess masters might not be the best people to plan operations.
Posted by snell at 10:16 AM

I Expect You To Die

snell
I'm old enough to remember when comics were "Still Only 25¢!!" The first comic I ever purchased on my own was Fantastic Four #170--the Thing in an exo-skeleton!! Luke Cage hired to fill the FF to 4!! The Puppet Master!! Boy, was I confused. Boy, was I hooked forever. Contact at snell27[at]excite[dot]com